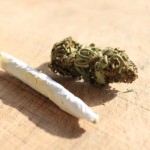 This meta-analysis adds more weight to the argument that cannabis use plays a causal role in the development of psychosis in some patients.

The study found that: