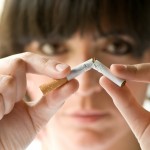 People with schizophrenia are 2-3 times more likely to smoke tobacco than the rest of the population, so helping them quit is a significant public health issue.

The evidence for smoking cessation interventions in the general population is fairly well defined. We know quite a bit about what works and we have a range of options to offer to anyone seeking help in kicking the habit. However, many of these treatments haven’t been well tested in people with schizophrenia and there’s some concern that they may have side-effects specific to people with psychosis.

The Cochrane Tobacco Addiction Group have recently updated their review on this subject, which includes a number of new trials that add further weight to the overall findings.  It’s by no means a conclusive review, but it does provide evidence about the effectiveness of bupropion, varenicline, contingent reinforcement, nicotine replacement therapy and other psychosocial interventions. The reviewers conducted a gold standard search and found 34 randomised controlled trials to include in their analysis.

Study participants were adult smokers with a current diagnosis of schizophrenia or schizoaffective disorder. People with substance misuse issues were not excluded as service users with schizophrenia often use other substances.

The adverse effects of the treatments were carefully measured.

Two reviewers independently assessed the eligibility and quality of trials, as well as extracted data. Data was pooled using the random-effects model. Bupropion increases smoking abstinence rates in smokers with schizophrenia, without jeopardizing their mental state. Varenicline may also improve smoking cessation rates in schizophrenia, but its possible psychiatric adverse effects cannot be ruled out. Contingent reinforcement may help this group of patients to quit and reduce smoking in the short term. We failed to find convincing evidence that other interventions have a beneficial effect on smoking in schizophrenia.

Epidemiological studies have shown that people with schizophrenia who smoke heavily (≥1 pack a day) are almost 3 times more likely to die from cardiac disease compared with non-smokers with schizophrenia. Hopefully this evidence can help some of these individuals become less dependent on tobacco.

It’s important to stress that many of the other treatments included in this review were not found to be ineffective, but there simply wasn’t enough evidence to prove their safety and efficacy.