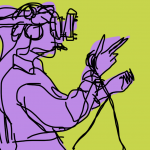 The feeling that people are out to get you is one of the most dramatic mental health symptoms. Current treatments are far from perfect.

The study by Daniel Freeman and colleagues published yesterday in the British Journal of Psychiatry looks at using virtual reality to reduce persecutory delusions. I am a medical student in Oxford where the majority of the authors of this research work (*conflict of interest alert*).

Delusions are false, unshakeable ideas or beliefs, held with subjective certainty (Sims 2003). They are often bizarre and become central in the person’s life. Someone experiencing a delusion cannot be convinced that their belief is incorrect; even if there is evidence showing that it is false. Persecutory delusions involve thinking, without proof, that people are trying to harm you.

Freeman and colleagues suggest one reason why people continue to believe their delusions is that they engage in safety behaviours (things that make them feel safe) which prevent them from discovering and processing evidence that disproves their beliefs.

Virtual reality may offer a way to challenge unfounded beliefs by exposing people to evidence that disproves their delusions and encourages them to stop their safety behaviours. 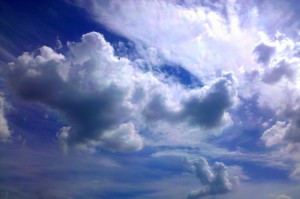 30 patients were recruited from adult mental health services in Oxford Health NHS Foundation Trust. To be eligible to participate they had to:

People were excluded from taking part in the study if they had:

Participants rated the conviction of their persecutory delusion from 0% (do not believe at all) to 100% (absolutely certain). They completed a 5 minute behavioural test that involved entering a social environment that they wanted to be less fearful in (e.g. walking to the local shop).

The participants had 7 brief periods in virtual reality in 2 different scenarios; an underground train ride and a lift. The scenarios got more challenging by including more people (avatars) in them. The train carriage scenario progressed from no avatars to 22 avatars, and the lift scenario progressed from 2 avatars to 6. Before and after each virtual reality exposure, participants were asked ‘At this moment how convinced are you that your worries are true?’ (to measure delusion conviction) and ‘How distressed do you feel about your worries?’ (to measure distress). The amount that the participants moved about in the carriage scenarios was also measured.

Finally, participants repeated the behavioural test and rated the conviction of their persecutory delusion. 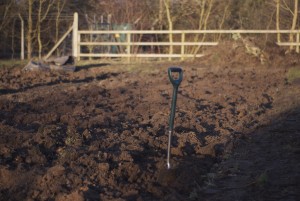 This small and innovative study set out to prepare the way for future work.

There were 15 people in each group, and the groups were generally similar at the start of the experiment. The mean age was around 40, most participants were of white ethnicity, unemployed, had high levels of depression and anxiety, and had a diagnosis of schizophrenia. However, the gender split was different in the two groups, with 10 males and 5 females in the threat belief testing group and 6 males and 9 females in the exposure group. 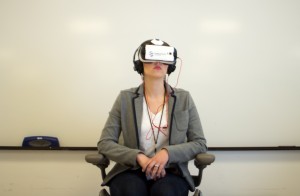 These preliminary results suggest that cognitive therapy using virtual reality could help treat delusions, but more work is needed before this treatment could be made more widely available.

Virtual reality can be used to present computerised versions of commonly feared situations to patients with persecutory delusions; that new learning can then take place; and, importantly, that the learning transfers to the real world.

This study uses a novel technique (virtual reality) to challenge persecutory thoughts by providing counter-evidence to a group of participants who may find it hard to engage with traditional forms of cognitive therapy. The use of a behavioural test means we can see that the virtual reality experience also had an impact on reactions in the real world.

The definition of delusions used in this study doesn’t include the requirement that the belief is unshakable/fixed and this may mean that this sample includes people who wouldn’t normally be defined as having a delusion. Instead, participants might have overvalued ideas (which do not need to be firmly held), or anxious or depressive thoughts of a persecutory nature. I would like to see this research repeated with people who have ideas that meet the more classical definition of delusion.

The study has a small number of participants (30 overall) and no placebo control, so we don’t know what happens to delusion conviction and distress if you don’t take part in virtual reality. It would be useful to include a cognitive behavioural therapy condition, as this is the current psychological treatment recommended for people with psychosis and schizophrenia (the dominant diagnosis of participants in this study) (NICE 2014).

Virtual reality offers a novel way of providing evidence that counters persecutory ideas and creates an environment to try out not using safety behaviours. It is early days in terms of thinking about rolling out virtual reality therapy. More research is needed with a larger sample and should include longer-term follow-up, an assessment of the acceptability of this therapeutic tool for patients, and cost effectiveness analysis. 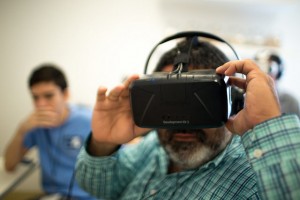 Could virtual reality facilities play a central role in mental health clinics and wards of the future?

Sims A. (2003). Symptoms in the mind: An introduction to descriptive psychopathology. London: Elsevier.

Last reply was February 13, 2019
Try out our members features!