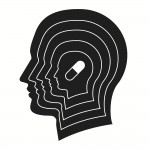 People who are experiencing psychotic symptoms for the first time, and have never had any treatment, do have changes on brain scans but many other factors can impact on studies in schizophrenia:

This has made teasing out what may be influencing the brain imaging findings very difficult, especially when individual studies have not involved enough participants to be able to fully explore all the complex influences involved. A change in brain structure can be positive, negative or neutral

The effect of antipsychotic medication on changing gross brain structure has been controversial.  Antipsychotics do help most people with schizophrenia cope with their symptoms (see these Mental Elf blogs from May 2012 and Aug 2013) and a substance that has to affect the brain’s biochemistry in order to work will, as an essential part of its action, change the structure and function of the brain.

If modern scanning techniques are now able to detect these changes it does not really alter the rationale for using antipsychotics: helping people cope with the distress of the symptoms.  On the other hand if there are specific patterns of brain changes, then this might flag up concerns about side effects that were not known about before.  A change in brain structure can be positive, negative or neutral.

To try and answer whether antipsychotics are linked to progressive brain changes a large number of people need to be compared.  Researchers with a lot of experience doing meta-analyses of brain scanning studies did an extensive search of the literature to find studies that had scanned the same people on at least two occasions (average 72 weeks apart).  They focused on studies that had included information about antipsychotic treatment, illness duration and illness severity.

The researchers had big problems with different studies reporting their results in different ways and only a few could be compared in the final analyses.  This was despite them restricting their study to only looking at the whole brain and not smaller subdivisions of the brain.

Antipsychotic treatment was measured by the total exposure to the drug over the course of the individual trial.

finally it is important to note that association is not causation and thus our findings …. should be interpreted cautiously