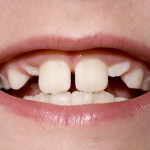 In a small proportion of children (1-3%) the upper permanent canine tooth is diverted into the roof on the mouth.  Treatment of this displacement can be complex and it is considered that the early removal of the primary canine tooth may improve the position f the developing permanent successor. The aim of this Cochrane review assesses the effect of extracting a maxillary primary canine on the eruption of a palatally displaced canine.

This is an update of a Cochrane review first published in 2009 with searches being conducted of the Cochrane Oral Health Group’s Trials Register, the Cochrane Central Register of Controlled Trials (CENTRAL) , Medline and Embase databases without restrictions.  Randomised or quasi-randomised controlled trial, involving the extraction of the deciduous maxillary canine and assessing eruption status of the palatally displaced maxillary permanent canine were included.  Data extraction was undertaken independently by two review authors and analysis was to follow normal Cochrane protocols.

There is currently no evidence of the effects of extraction of primary canine teeth in 10-13 year old children with one or two palatally displaced permanent canine teeth.

Since the original version of this Cochrane review was published a review was undertaken by Naoumova  et al 2011 ( Dental Elf 28th Jul 2011) this included the same two trials as this review coming to similar conclusions.  The Naoumova review has been reviewed by the ADA-EBD Centre (Dental Elf Oct 6th 2011)

As the authors this Cochrane review suggest, in the absence of evidence of effectiveness should we still be subjecting children to this ‘routine practice’.  Having taken out a far few primary canines for my orthodontic colleagues in the past should we not all be calling adequately powered and appropriately designed trials to give us a definitive answer.  Not knowing means that we could be subjecting children to a procedure that is of no benefit and potential of some harm so you could argue that we have a duty to perform a trial to get his answer rather than to allow the current status quo to continue.