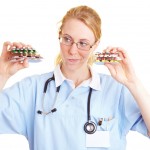 There are many different antidepressants to choose from when treating acute depression, so it’s always helpful to see a systematic review that looks at the efficacy, acceptability and tolerability of the different drugs.

This new Cochrane review compares duloxetine hydrochloride (one of the newer drugs) with other antidepressants and finds little high quality evidence upon which to base treatment decisions.

Along with escitalopram and desvenlafaxine, duloxetine is one of the few antidepressants that remains on patent. Many of the included studies in this review are therefore sponsored by the drug industry, so it’s worth considering sponsorship bias and the fact that the results are likely to overestimate the true treatment effect.

As always, the Cochrane reviewers performed a systematic search to find randomised controlled trials to include in their analysis. They found 16 trials with 5,735 patients in total, comparing duloxetine to SSRIs, newer antidepressants and antipsychotics also used as antidepressants.

Here are the results of their analysis:

Duloxetine did not seem to provide a significant advantage in efficacy over other antidepressive agents for the acute-phase treatment of major depression. No differences in terms of efficacy were found, even though duloxetine was worse than some SSRIs (most of all, escitalopram) and newer antidepressants (like venlafaxine) in terms of acceptability and tolerability.

Overall, this is an emerging area of evidence, as is often the case with newer drugs where only a small number of (mostly industry sponsored) trials have been produced. We will have to wait for further studies before we can make any definitive judgements about duloxetine.