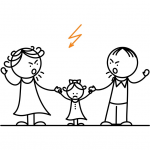 Negative childhood experiences have always been a big topic in psychology and psychiatry, as they tend to be associated with poor mental health outcomes in later life.

Intimate partner violence (IPV) harms not only the adults directly involved in it, but also the children – witnessing IPV as a child is a known risk factor for experiencing IPV and poor mental health as an adult. Exposure to parental depression is also a risk factor for decreased cognitive ability and behavioural problems.

This cohort study, performed in Indianapolis, Indiana, and published in JAMA Pediatrics, looked at possible links between childhood exposure to parental depression and intimate partner violence (IPV) and subsequent mental health outcomes of the children.

The cohort was recruited from people using healthcare services in four community paediatric health centres. There had to be at least two visits documented in the system: one between the child’s birth and age 36 months, and a second visit between age 37 months and 72 months (6 years). Data were captured from a pre-screening form that parents were asked to complete in the waiting room. It included questions about if their partner had kicked, slapped or hit them and whether they felt safe in their home. To screen for depressive symptoms, it also asked whether they had felt down or depressed or lost interest or pleasure in doing things. In 2010, these questions were changed to whether they’d blamed themselves unnecessarily or felt panicky or anxious in the past seven days.  The cohort was divided into four groups according to their answers.

The researchers were interested in finding out whether there is a link between exposure to IPV and/or parental depression and children being diagnosed with mental health conditions and/or being prescribed psychotropic medication.

At age 3-6, the following diagnoses were present: 48 children (2.0% of the cohort) had been prescribed psychotropic medication. 15 out of 20 of these prescriptions were for ADHD, the others for antidepressants (SSRIs).

Children of parents who reported IPV were more likely to develop ADHD (6.3% vs 3.1%).

The authors conclude that this study supports existing literature finding that:

They suggest that children in families reporting IPV should be screened for mental health conditions and monitored over time.

There are several limitations of this study:

However, the study also has several strengths:

The main take-home message seems to be that exposure to IPV and/or parental depression can be detrimental to children’s mental health, and that screening should be used to identify children who are at risk. I like the suggestion that treatments for parental depression should be part of a child’s treatment plan – in practical terms, there isn’t usually a lot paediatricians can do to stop IPV from occurring, or children from witnessing it, but helping with a parent’s depression is within medical powers.