Home » Posts » Mental health » dementia » No evidence for the use of aspirin, steroids or NSAIDs for the treatment of Alzheimer’s disease 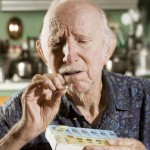 Alzheimer’s disease affects 1-2% of people aged 65-70 and approximately 20% of those over 80 years. As our population ages, the condition is on the increase and it’s estimated that 2030, an estimated 7.7 million Americans aged 65 and older will have Alzheimer’s disease.

We do not yet know exactly how and why Alzheimer’s disease develops, but one popular hypothesis is that inflammation in the brain may be associated with the condition.

Community surveys have been published that show that people receiving anti-inflammatory drugs for various medical conditions may be less likely to develop Alzheimer’s disease.

This new systematic review from the Cochrane Dementia and Cognitive Improvement Group set out to review the efficacy and side effects of aspirin, steroidal and non-steroidal anti-inflammatory drugs (NSAIDs) in the treatment of Alzheimer’s disease, compared to placebo.

They conducted a thorough search and found 14 randomised controlled trials that met their inclusion criteria. They grouped the trials into the following categories:

The quality of the studies was variable. They assessed the risk of bias as low for five studies, high for seven studies, and unclear for two studies.