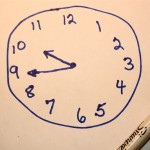 Recently, the one millionth person in England became a dementia friend. Now this shows how much awareness of dementia has been raised already since the initiative started two years ago, and is continuing to make everyone aware, from shop owners to hotels to friends.

In the English National Dementia Strategy, and in the new Prime Minister’s Challenge on Dementia 2020 (PDF), raising awareness is one major priority. Another one is improving diagnosis rates. With high GP workloads and a large assessment involved when diagnosing dementia, finding ways to increase the number of diagnosed people with dementia and reducing the time of diagnosis are much sought-after.

In this blog, I review a recent Cochrane systematic review on the efficacy of the Mini-Cog (Borson et al., 2005) in detecting dementia by Fage and colleagues (2014). The Mini-Cog test involves remembering 3 words and repeating them 3 minutes later, and drawing a clock-face with a specific time on it.

The authors (Fage et al., 2014) searched standard electronic databases, including MEDLINE and PsycINFO, whilst also looking through the reference lists of each relevant study for more studies. Studies were included if they used the Mini-Cog (PDF) as a cognitive diagnostic tool; included people with dementia in a community setting; and clearly explained how a diagnosis of dementia was made.

The authors scanned 110 studies after having removed duplicates, and excluded 107 studies based on their exclusion criteria. The review did not find sufficient evidence to recommend the Mini-Cog as a cognitive screening test in community settings.

This review follows standard guidelines of conducting a systematic review, in searching a broad range of databases for studies, as well as hand searches. This is linked with appropriate extraction methods. Considering the small number of studies resulting from the searches (only three inclusions), it may have been more appropriate for the authors to go back to the first searches and redo the searches for any setting.

Currently, this review only focuses on community settings. Whilst Chan et al. (2014) and Seitz et al. (2014) are in the process of redoing this systematic review for primary and secondary care settings, it may have been truly more appropriate to apply any setting. We shall see how many studies are turned up by the primary and secondary care reviews.

The other limitation of this review is not subject to the review itself, but to the limitations of the included studies. As the authors rightly highlight, two study samples had very high prevalences of dementia (44% and 52%). These high proportions are not common in the general community-dwelling older population, which means that participants were preselected. This could have biased the reported sensitivity and specificity of the Mini-Cog. The three Cochrane reviews on the Mini-Cog (1 published and 2 in progress) may have worked better as one big review.

The Mini-Cog does not seem to be an effective alternative to currently-practised forms of dementia diagnosis. There is too little evidence available, and the evidence there is has only been produced by the creators of the Mini-Cog.

Comparing the Mini-Cog to other brief measures of global cognition, such as the Mini-Mental State Examination (MMSE), the Montreal Cognitive Assessment (MoCA) and the Addenbrooke’s Cognitive Examination III (ACE-III), the Mini-Cog appears too brief to be truly reliable in assessing dementia. The MMSE, MoCA and the ACE-III comprise a variety of different forms of cognition, for example asking people to repeat a sentence, to calculate, to write a couple of sentences or to remember an address after a ten-minute delay. Still, they only last between 10 to 15 minutes to administer each.

Although the efficacy of the Mini-Cog is currently being reviewed in primary and secondary care settings by the Cochrane Dementia and Cognitive Improvement Group (Chan et al., 2014; Seitz et al., 2014), it is unlikely that the Mini-Cog will replace current cognitive screening tools.

Indeed, if we are to address the government’s objective to improve dementia diagnosis, we must better understand the earliest symptoms of daily activity problems (Giebel, Challis, & Montaldi, 2014), or indeed (on a micro-level) detect the build-up of amyloid-beta oligomers in the brain earlier (Rushworth et al., 2014). All of the included studies were conducted by the creators of the Mini-Cog, which is not ideal.