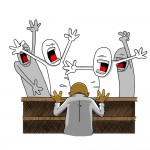 There is an increasing body of evidence showing that depression and anxiety are linked with other health conditions like cancer and cardiovascular disease. I’ve blogged about the link between depression and stroke, and there are a number of other studies that show an association between psychological distress (the symptoms of depression and anxiety) and mortality, cardiovascular disease and cancer. Unfortunately, studies to date have not had sufficient power to reliably measure the thresholds of risk.

A group of researchers from Scotland, led by Tom Russ, have published a meta-analysis of 10 large prospective cohort studies in today’s BMJ. Their study shows that a dose-response association exists between psychological distress and major causes of mortality.

This is a really interesting piece of research that has major implications for us all. It looks at subclinical symptomatic levels of psychological distress, so not symptoms of depression or anxiety that would warrant a clinical diagnosis, but milder symptoms of distress measured by the GHQ-12 (General Health Questionnaire).

Of course, depression and anxiety exist along a sliding scale and it’s possible to worry, feel unhappy, worthless and low on confidence without being clinically depressed or anxious. This research investigates what impact these lower levels of psychological distress have on the health of the population at large.

The research team pooled data from 10 large prospective cohort studies from the Health Survey for England (68,222 people in total, aged 35 and over, free of cardiovascular disease and cancer at baseline).

The outcomes they were interested in were death from all causes, cardiovascular disease (including stroke), cancer and deaths from external causes. The mean follow-up period was 8.2 years.

Psychological distress is associated with increased risk of mortality from several major causes in a dose-response pattern. Risk of mortality was raised even at lower levels of distress.

Readers with access to the BMJ will be interested in the editorial from Professor Glyn Lewis that explores the practical implications of this new research.