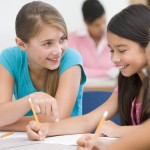 It is estimated that 20% of children up to the age of 18 will have suffered an emotional disorder of depression or anxiety (Costello et al., 2003). These two mental health conditions commonly occur together and can significantly influence daily functioning, relationships and education in this age group.

Effective and evidence-based psychological treatments have been identified for depression and anxiety, nevertheless, both the demand and waiting lists for these is extremely high. Those who actually seek help or meet the criteria for treatment tend to only experience modest effects as well as high rates of relapse.

Research has tended to focus on preventative and early intervention psychological treatments due to the limited availability and success of other treatments. These approaches aim to build upon emotional resilience. Programmes comprising universal (provided to all members regardless of risk e.g. all 12 year olds) or selective (target populations with increased risk of developing a condition e.g. children of parents with anxiety disorders) aim to reduce the development of new disorders and improve psychological functioning.

Universal approaches have the potential to cover a large number of individuals, are easily offered and stigmatise less, but, they have a smaller treatment effect when compared to selective programmes which focus on finite resources but tend to demonstrate greater treatment results. However, they require the accurate identification of children at risk, target a smaller population and can be difficult to deliver. Therefore, it appears sensible to offer such programmes for the prevention of mental health disorder development in a school-based environment as most young people consistently attend school. Whilst the primary focus of schools is to develop academic skills, it is becoming increasingly accepted for such establishments to concentrate on their students’ emotional health.

Professor Paul Stallard (Head of Psychological Therapies at the Oxford Health NHS Foundation Trust) recently published an expert review in the Evidence-Based Mental Health journal, which investigated both the effectiveness and evidence base for these programmes (Stallard, 2013).

Stallard’s expert summary investigated a recent Cochrane Review which reviewed the outcomes of 55 randomised controlled trials of psychological and educational depression prevention programmes (Merry et al., 2011). Participants included 14,406 young people between the ages of 5 and 19. Half of the programme interventions were targeted and most of these included cognitive behavioural therapy (CBT) components. These ranged from 3-30 sessions of differing length and were delivered by staff external to the school. The CBT content covered factors claimed to protect against depression development such as positive and enabling thinking styles, emotional recognition and regulation, and coping and personal effectiveness skills.

When compared with no intervention, both universal and targeted depression prevention programmes reduced depressive symptoms at 12 months follow-up. However, effect sizes were modest and studies were small, underpowered and lacked methodological quality. Also, comparisons with other active interventions are few and the results are often inadequate. Results from reviews of school-based anxiety prevention programmes have generally been found to be more positive. A systematic review investigating 27 randomised controlled trials found that most were universal programmes including CBT comprising between 8 and 10 sessions delivered by mental health professionals (Neil & Christensen, 2009). However, only half of the studies provided post-intervention data with 10% reporting a follow-up for 2 or more years.

Authors concluded that universal and indicated approaches were both effective. The effects of CBT programmes were not formally tested but their effects were slightly larger than non-CBT interventions. A median effect size for CBT programmes of 0.57 was found, which indicated a moderate effect. In addition, only four of the included studies included an attention control comparison with effect sizes in these studies tending to be smaller. Effect sizes between studies differed significantly, which suggests that although the programme content is important, mediating variables including leader rapport, audience appeal and levels of participation are important influential factors that need to be acknowledged. Programmes need to be delivered in an engaging manner so as to not reduce their effectiveness.

One particular anxiety prevention programme, the FRIENDS programme which was developed in Australia is well established in its effectiveness. The programme is manualised and can be delivered as universal or indicated options. It includes a variety of age-appropriate fun activities including stories, quizzes, role plays and games, which are used to help children learn practical skills to identify and thus use techniques such as replacing unhelpful thoughts with more helpful ones to control their anxiety. The programme also allows parents and carers to participate in sessions to provide an overview of the CBT content and skills their children learn. A number of studies have demonstrated its effectiveness, yet other evaluations have failed to do so. The FRIENDS programme is now available as a mobile app.

Stallard concluded that a number of studies demonstrate that school-based depression and anxiety prevention programmes delivered as universal or indicated interventions can be effective in the short-term when compared with non-intervention groups. As mentioned above, few studies have made comparisons between prevention programmes against other active interventions, and where programme effects have been reported, the effects are typically non-significant.

There is a real need for further, robust, long-term evaluations with active interventions that include the economic evaluation of possible cost-benefits. In addition, factors other than the specific content appear important as well as moderating factors of treatment effects including child, gender, age, ethnicity and symptom severity, and these should be investigated. Another important identified factor is the implementation of the programme into the school environment and the obstacles associated with this. Timetables are already filled and this factor could impede effective delivery.

But wait a minute, what about the little elves who aren’t able to attend or not enrolled in school or other educational establishments due to poor mental health or other reasons? It appears crucial to target these vulnerable, at risk individuals. Stallard, P. (2013). School-based interventions for depression and anxiety in children and adolescents. Evidence Based Mental Health, 16(3), 60-61.