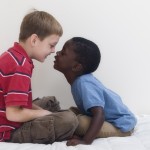 Recent adult mental health policy initiatives, such as the Delivering Race Equality programme (PDF) show the increasing recognition of racial discrimination in NHS mental health services. In 2012 the NHS Confederation issued guidance on achieving race equality in mental health, which was summarised on the Mental Elf a while ago.

These UK policy developments on race and mental health have happened in the broader context of understanding more about health inequalities in general and about social determinants across all ages in particular (Marmot, 2005, PDF).

This study forms part of the increasing evidence about the social, cultural, historical and environmental factors that may determine all aspects of health, including mental health. The authors, who are based in UK and Australia, present the first international systematic review of epidemiological research on reported racial discrimination and health (including mental health and behavioural issues) for children and young people. The review aimed to investigate:

Empirical studies using qualitative methods were identified through a search of the major international health and social research databases, Google, key website searches and expert advice. Unpublished theses were included. The search dates were from the earliest possible to November 2011. Studies had to focus on the associations between reported racial discrimination and health and wellbeing outcomes for children and young people aged 0-18 years. Searches were conducted in English.

Of the initial 5,693 papers, 121 studies were finally included after screening by three researchers working independently. These studies were then critically appraised and data was extracted using a standard form. A random 10% sample was quality checked by an independent researcher. The majority of studies had been published in the 7 years previous to 2011 and used cross-sectional designs (descriptive studies that aren’t longitudinal or experimental).

71% of studies were carried out in the US, with only 18% from Europe or the UK. The dominance of studies from the US meant that 40% of the study populations were African American. Most of the other studies looked at Latino/a people (29%) or Asian populations (including South and East Asian) (25%). The majority (85%) of studies were of young people aged between 12 and 18 years. Convenience, rather than representative sampling was used in 83% of studies and the most common location was urban.

A total of 123 different scales or instruments to measure reported racial discrimination were used across the 121 studies reviewed, with 69 being between 1 and 9 items in length. The two most common instruments used as exposure measures were the Everyday Discrimination Scale (EDS) and the Experiences of Discrimination scale (EOD). In 79 of the studies scales were specifically designed for the research. Only 36% of studies included a timeframe for exposure measurement.

Most significantly the authors found that:

Of the 461 associations examined in these studies, mental health outcomes (e.g depression, anxiety) were most commonly reported (51%), with statistically significant associations with racial discrimination found in 76% of outcomes examined

The most common negative health outcome associated with racial discrimination was for mental health and psychological wellbeing.

The systematic review method is considered to be the best way of synthesising research to obtain a reliable evidence-base on a topic or intervention. But a systematic review is generally only as good as the research included. Because of the topic and some of the difficulties with the definitions of racial discrimination, sampling and study design, the authors caution that: This systematic review provides evidence that there can be an association between poorer mental health and experiences of racial discrimination for children and young people, but also shows there are important limitations within the studies included which influence the strength of that evidence. The dominant body of research was undertaken in urban settings in the US with young African American or Latino/a people aged between 12-18 years so are these findings generalisable to a UK context? Another limitation is that there were a lack of longitudinal studies so the review cannot reveal the impact over time. The authors also note that ‘the fact that this review relies so heavily upon articles written in English, can be considered as a source of bias’.

Despite these limitations, this study has important messages for mental health policy and practice in the UK context, with its increasingly complex and racially diverse population. Recognising the nature and possible impact of racial discrimination on the mental health of children and young people from within and across all racial or ethnic groups should form a part of prevention and wellbeing strategies. It should also inform ‘biopsychosocial’ understandings of mental health in children, young people and adults.

This research review reveals a significant gap in the research for the UK and Europe, where histories and contexts are different to the US. Future research could be conducted with children and young people from a greater or more representative range of backgrounds to see if there are differential impacts. Studies could also be conducted to investigate the impacts of experiences of childhood racial discrimination on mental health over time and into adulthood.