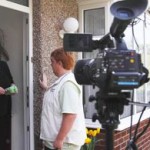 Living your own life in your own home is something most of take for granted. It’s just something you do. We don’t tend to think about community, or independent living, or planning, we get on with it. This is not always the case for people with learning disabilities.

In this post, we wanted to link you to some excellent films that have just been published by Inclusive Films. In some ways they are not remarkable, as they are telling quite ordinary stories.

Living your own life

The films tell what could be described as quite ordinary stories.

The films follow the stories of eight people with learning disabilities or autism who have moved into their own homes, with each story featuring a particular kind of support and living arrangement. They provide good clear evidence of what it might take to support people and show a range of different ways to do this.

Another living arrangement shown in the film is an extra care housing scheme.   Extra care schemes usually consist of a block of 20-40 flats or bungalows, sometimes with some shared facilities and with a warden for support. They are usually developed for older people, but some younger people with learning disabilities also choose such schemes as a place to live.

Two people also move into their own bungalow, which they rent from the local authority along with staff support on a flexible arrangement and one film shows how one person was able to significantly increase their choices and the control they had over their life after leaving a care home for their own flat.

The films are a great way to bring these stories to life and create a personal connection to the stories.