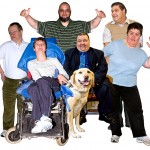 The researchers in this US study were looking to compare a range of indicators of health status and service use between adults with learning disabilities, with and without Down syndrome.

They compared 1,199 people using services who had Down syndrome (DS) with a comparative sample of 11,182 people with learning disabilities who did not have Down syndrome. They got their sample from National Core Indicator surveys of adult service users in 25 U.S. states.

What they found was

Demographic Characteristics, Health Conditions, and Residential Service Use in Adults with Down Syndrome in 25 U.S. States, Stancliffe R et al., in Intellectual and Developmental Disabilities, 50, 2, 92-108.