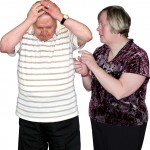 Dementia has been shown to be present at higher rates in adults with learning disabilities, with people with Down syndrome being at significantly increased risk of developing early onset dementia.

The researchers in this Italian study were keen to look at whether approaches to dementia-derived environment, input from specialist personnel or patient-oriented intervention strategies had any impact on delaying the onset of dementia or in slowing down its rate of progression. They set out to look at a multi-component non-pharmacological approach to working with adults with learning disabilities and dementia.

They worked with a sample of 14 adults with worsening cognition and everyday functioning who had been assessed locally as no longer able to stay at home with their families or to continue to receive support from mainstream day centres or group homes. Each of these 14 people had been moved to a model special care unit (SCU) designed to proactively accommodate the needs of people with learning disabilities and dementia.

The researchers took baseline measures and looked at the rate of decline across a 3-year period using the Dementia Questionnaire for Persons with Intellectual Disabilities. They compared this trajectory with two matched control groups who were no in specialist dementia services.

The measures taken after three years showed that there was some improvement in cognition and a stabilisation of everyday functioning and behaviors in the specialist care unit residents, whereas the there was a worsening of these factors in the control groups.

They found that being in a dementia specialist service helped people to practice their daily living skills and abilities and enhanced their memory and verbal communication.

They point out that there are a number of difficulties in the interpretation of the findings, but that their positive natures, even at this early stage suggest that the findings

confirm the validity of this in-place progression model and provide a platform for continuing progress in person-centered services and care for aging persons with ID.