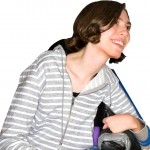 Hyperacusis is an extreme sensitivity to sound, which may have a psychological or organic basis. People with Williams Syndrome, a neurodevelopmental disorder, often have this sensitivity to noise.

The researchers in this study looked at the extent to which such sensitivity might interfere with perception of speech in children and adults with the syndrome. All the participants had to discriminate words differing from each other in one consonant of a cluster, but they were asked to do this when the differences were embedded in background noise.

They conclude that their results suggest alterations in sensitivity to input mediate atypical pathways for language development in Williams syndrome, where hyperacusis is important influence along with other non-auditory factors.