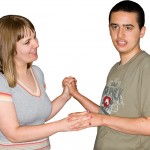 There have been a number of studies testing attributions of support staff and their impact on helping behaviour when supporting people with learning disabilities anf challenging behaviour. We posted about one such study in January this year which looked at the impact of using vignettes to measure helping behaviour and used Weiner’s theory to explain the results.

Attribution Theory attempts to explain the world, seeking out the connections between cause and effect to help explain why people might behave the way they do in any given set of circumstances. Weiner’s attribution model identifies some basic attribution categories to explain success or failure, including stability, locus of causality and locus of control

They found a number of interesting relationships, for example – challenging behaviour aimed at the environment appeared to be related to higher levels of negative emotions, attributions and interpersonal styles such as controlling behaviour.

They suggest that future research in this area should  focus on real staff behaviour and develop a broader, more dynamic, and systemic view of staff behaviour.

The relationship among attributions, emotions, and interpersonal styles of staff working with clients with intellectual disabilities and challenging behaviour, Zijlmans L et al., in Research in Developmental Disabilities 33,  5, 1484–1494