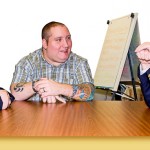 Solution-focused brief therapy (SFBT) is about brief interventions, focusing on solutions, rather than on the presenting problems. The early development of the therapy was based on the notion that even for people suffering chronic problems, there are periods when the difficulties do not occur or are less intense. It was posited by early pioneers of the therapy that studying these times might identify the positive things that such people do, even if they are not fully aware of them. The therapy is based on bringing these small successes into awareness and developing strategies to repeat successful things, rather then spending time focusing on the existing problem behaviours.

The authors found that solution focused brief therapy treatments contributed to improvements in psychological functioning and decreases in maladaptive behaviour. They also found that attainment of goals were noted by both the people with learning disabilities and their carers. At six week follow-up, the positive changes were still evident. The experience of the treatment was assessed as positive by most of the participants.

The authors point out that this is a very small study and suffers from the lack of controls, but as the majority of cases showed positive results, they suggest that this might indicate that solution focused brief therapy may be effective for people with mild learning disabilities.