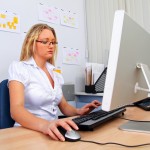 Although most Musculoskeletal Elves lead very physically active lives there are a small minority of Elves who are office based. Occasionally I hear them complain of episodes of low back pain and they have enquired of me as to what contributed to its onset. Although I felt I had a reasonable idea as to the main factors, I thought I’d better try to give a more informed answer. Luckily I came across a systematic review on risk factors for the onset of non-specific low back pain (NSLBP) by Janwantanakul et al (2012).

The authors conducted a wide search of information databases from 1980 to November 2011 looking for prospective cohort studies of office workers involved in computer work who were free from NSLBP at baseline. Workers were followed up for at least one year. Two reviewers independently evaluated the included studies’ methodological quality with fairly rigorous criteria.

The initial search yielded 7112 citations. After the screening of abstracts and titles, 18 full-text articles were read in full. Fifteen were excluded because they did not meet the selection criteria, leaving only 3 articles that were judged to meet the criteria and were included in the methodological quality assessment.

There was strong evidence that history of low back pain (LBP) was a predictor of the onset of non-specific LBP.

“After reviewing three high-quality prospective cohort studies on the association between risk factors and the onset of NSLBP in office workers, few risk factors were found to predict its onset. Most factors previously investigated have no predictive value for future NSLBP, such as age, daily computer use, workstation ergonomics, social support, and job demands.”

surprised that only three papers were found for this review, but it seems that, although risk factors for LBP in the general population have been sought in previous systematic reviews, this important and expanding sub-population of office computer users has not been explored in this way previously. The number of internet users worldwide is estimated at 2.3 billion (internetworldstats, 2012), therefore, the number of computer users will be greater than that, with office workers potentially spending 5 hours 40 minutes a day sitting at their desk (BBC News, 2012).

Obviously previous incidence of LBP is an non-modifiable risk factor; however, knowing that this may lead to a recurring episode means that healthcare professionals should equip office workers with the information and resources that they require to self-manage any future episodes of LBP appropriately. Resources could include NHS Scotland’s newly launched Musculoskeletal Help mobile phone app as reported in one of our recent blogs.

Were you surprised by the findings of this review? Send us your views on this blog and become part of the ever expanding Musculoskeletal Elf community.