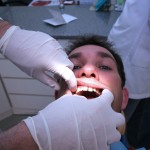 Yesterday we looked at a review of the effectiveness of oral examination to detect potentially malignant disorders and mouth cancer today we are looking the latest version of the Cochrane review on screening programmes for the detection and prevention of oral cancer. The overall aim of this review was to assess the effectiveness of current screening methods in decreasing oral cancer mortality.

For this update new searches were performed in the Cochrane Oral Health Group’s Trials Register the Cochrane Central Register of Controlled Trials (CENTRAL), Medline Embase and CANCERLIT. The review text, methodology and background have been brought up to date following the usual Cochrane methodologies but the overall conclusions have not changed.

There is evidence that a visual examination as part of a population-based screening programme reduces the mortality rate of oral cancer in high-risk individuals. In addition, there is a stage shift and improvement in survival rates across the population as a whole. However, the evidence is limited to one study, which has a high risk of bias and did not account for the effect of cluster randomisation in the analysis. There was no evidence to support the use of adjunctive technologies like toluidine blue, brush biopsy or fluorescence imaging as a screening tool to reduce oral cancer mortality. Further RCTs are recommended to assess the efficacy and cost-effectiveness of a visual examination as part of a population-based screening programme in low, middle and high-income countries.

As the authors note this review only includes one study, which was conducted in India, which has a higher prevalence of oral cancer than many countries. For example oral cancer represents 30% of all new cancers in men in India, Sri Lanka and Pakistan but just 3% of new cases of cancer in the United Kingdom. So whether screening programmes in countries with lower prevalence would have a similar effect even in high-risk groups is uncertain.   The UK National Screening Committee (NSC) last reviewed its policy on oral cancer screening in 2010  when it decided not to recommend systematic population screening.  The NSC will review this some time in 2013/4.

Consequently as noted yesterday It is important that practitioners remain vigilant for signs of PMD and oral cancer whilst performing routine oral examinations in practice. They should also be active in persuading patients to stop using tobacco and betel quid and to consume alcohol within recommended limits.