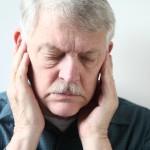 Between 10 to 15% of the population suffer with temporomandibular disorders (TMD) common symptoms include  clicking and crepitus of the joints ,limited or painful mouth opening and stiffness of the jaw muscles. Tinnitus, my patient experiences ringing swishing or whistling sounds the absence of external stimulation is also reported by some patients.  Several theories for a link between TMD and tinnitus have been proposed.

The aim of this review was to evaluate the prevalence of tinnitus in patients with TMD and whether TMD treatment can affect tinnitus.

Searches were conducted in the PubMed, Cochrane Library and Web of science databases with no restriction on language. This was supplemented by a search of selected textbooks and reference lists on included papers. Studies involving more than 10 TMD patients published in English or Swedish were considered.

This systematic review found a higher prevalence of tinnitus in patients with TMD compared with the general population. This supports the comorbidity between TMD and tinnitus; however, all but one of the included primary studies on treatment of TMD lacked control groups, which means that future research should target the pathophysiological association. The lack of evidence with respect to a possible relationship between tinnitus and TMD result in a request for well-designed, randomised controlled trials in order to clarify the relation between tinnitus and TMD and the possible effect from TMD treatment on severity of tinnitus in patients with TMD and co- morbidity of tinnitus.

This review of tinnitus in patients with TMD has searched three major databases but restricting searches to English and Swedish may have resulted in excluding some relevant studies. The findings suggest a higher prevalence of tinnitus in TMD patients,  finding a similar median prevalence (42.3%) to the frequency of 52% reported in a 2016 review by Porto De Toledo (The Dental Elf – Oct26 2016). While studies examining the effect of TMD treatment on tinnitus suggested a beneficial effects the quality of the included studies was low. In particular there was only only one study looking at the effect of TMD treatment tinnitus included a control arm. Consequently further high-quality randomised controlled trials are needed to assess the effect of TMD treatment on tinnitus.

Another recent review of this question has been published by Mottaghi et al  however that review is restricted to a single database  so is very likely to have excluded relevant articles. That review reported ah higher prevalence of  TMD patients with tinnitus in the range  (35.8% to 60.7%).

Mottaghi A, Menéndez-Díaz I, Cobo JL, González-Serrano J, Cobo T. Is there a higher prevalence of tinnitus in patients with temporomandibular disorders? A systematic review and meta-analysis. J Oral Rehabil. 2018 Aug 20. doi: 10.1111/joor.12706. [Epub ahead of print] Review. PubMed PMID: 30125964.