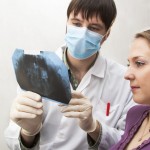 Patients with the research diagnostic criteria for temporomandibular disorder for TMJ osteoarthritis, confirmed on radiographic  were randomized to the daily intake of 1,200 mg glucosamine sulphate ( n=30) or identical placebo capsules( n=29)  in this double-blind trial.  Pain on visual and verbal rating scales and opening capacity were the main outcome measures. These were measured at baseline and at 6 weeks.

Oral glucosamine sulphate was not superior to placebo in reducing signs and symptoms of osteoarthritis in the TMJs in this short-term trial.

Comment :- This is a single short-term study and compliance appears to have been a concern in both groups with the placebo group using rescue medication.  A recent Cochrane review ( Towheed T et al 2009)  concluded

Pooled results from studies using a non-Rotta preparation or adequate allocation concealment failed to show benefit in pain and WOMAC function while those studies evaluating the Rotta preparation showed that glucosamine was superior to placebo in the treatment of pain and functional impairment resulting from symptomatic OA.