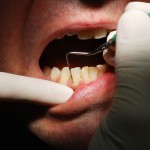 The World Health Organisation has stated that the retention, throughout life, of a functional, aesthetic, natural dentition of not less than 20 teeth and not requiring recourse to prostheses should be the treatment goal for oral health. This is consistent with the concept of the shortened dental arch (SDA) with an intact anterior region and a reduced number of occluding pairs of posterior teeth. The aim of this multicenter trial was to compare the outcomes for two different treatment options for the shortened dental arch.

Patients over 35 years of age with complete molar tooth loss in one jaw were randomized to receive either a partial removable dental prosthesis (PRDP) retained with precision attachments (n= 109) or, in the SDA group ( n= 106) no prosthetic extension of the dental arch was conducted if the posterior-most tooth was the second premolar. If the posterior-most tooth was the first premolar, a cantilever FDP for replacement of the second premolar was incorporated. In both groups, missing anterior teeth were replaced by fixed dental prostheses (FDPs).  The opposing jaw had to be sufficiently restored up to the first molar in the PRDP group or the second premolar in the SDA group. Probing pocket depths ≤4 mm and generalised bleeding on probing rates ≤25% were pre-conditions to enter the prosthetic treatment phase. In the majority of cases, this condition had to be achieved by an appropriate pre-treatment. Supportive periodontal therapy (SPT) was administered depending on individual patient needs according to the protocol of the participating centres. Tooth loss was the primary outcome with plaque index (PI), probing pocket depth (PPD),  vertical clinical attachment loss (CAL-V),  and bleeding on probing (BOP) as secondary outcomes.

that even in a well-maintained patient group statistically significant although minor detrimental effects of PRDPs on periodontal health are measurable.

We have previously highlighted the tooth loss outcomes for this study (Dental Elf 5th July 2012) and the oral health related quality of life has also been reported (Wolfart et al) and the original trial protocol is also available from www.controlled-trials.com . The authors note that although the RPDP group had the slightly more unfavourable outcomes both groups deteriorated over time. Drop out rates were slightly higher in the SDA group at 33% compared with 27% for the RPDP group, which could influence the findings.