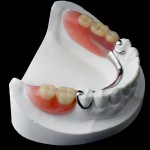 The shortened dental arch (SDA) concept classically consists of 20 occluding teeth (all upper and lower incisors, canines, and premolars) with missing posterior teeth only being replaced if they are considered necessary for appearance or function. This is seen as an alternative approach to the replacement of all missing teeth with fixed (FDPs) or removable dental prostheses (RDPs). The aim of this systematic review was to synthesise the available knowledge from the dental literature about the effects of distal-extension RDPs on the masticatory performance of subjects with moderate or extreme SDA.

Searches were conducted in the PubMed/Medline, Cochrane Library, Embase, and Science Direct databases Studies on patients with SDA (3-5 posterior occluding pairs) or extreme SDA (0-2 posterior occluding pairs) and on masticatory performance with RDP were considered. Two reviewers independently screened titles and abstracts of the identified records for relevance and abstracted data.

Within the limitations of this review, it can be concluded that subjects with (E)SDA had a reduced masticatory performance in the order of 30–40%. Distal-extension RDPs compensated for this reduction only partially, namely in the order of 50%. RDP effects on chewing frequency were not conclusive.

A broad range of databases has been searched and a clear selection process has been undertaken. However, no assessment of the individual study quality has been presented. Overall the included studies involved a total of just 180 participants with a range of 8-30 patients in each study. While each of the included comminution studies reported on median particle size (X50)  a variety of test food were used. There was also variation in the study designs with some being undertaken with and without  partial dentures (RPD) and some with different designs of RPD. While the findings suggest that RPD partially compensate masticatory function in those with missing teeth the small number of studies available involving a small overall sample should be taken into account when interpreting the findings particularly as there is known to be a large individual variation between subjects in habitual chewing and swallowing characteristics.