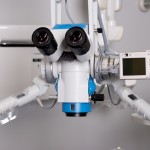 A range of magnification devices have been introduced for use in endodontics eg. loupes, surgical microscopes and endoscopes and their use has become commonplace. The use of loupes and microscopes has been shown to improve clinicians’ working posture but there are still questions as to whether they result in greater treatment success, reduced treatment time, and lower total costs.

Searches were conducted in the Cochrane Oral Health Group Trials Register, The Cochrane Central Register of Controlled Trials (CENTRAL), Medline, Embase, US National Institutes of Health Trials Register, and The WHO Clinical Trials Registry Platform. A number of manufacturers and authors were also contacted.

No article was identified in the current literature that satisfied the criteria for inclusion. It is unknown if and how the type of magnification device affects the treatment outcome, considering the high number of factors that may have a significant impact on the success of endodontic surgical procedure. This should be investigated by further long-term, well-designed RCTs that conform to the CONSORT statement .

This is an update of a Cochrane review last reviewed in 2009 following its original publication in 2006. As the authors note that the use of magnification devices in dentistry is increasingly common and their use has been recommended as a standard of care for endodontic treatment. However, as this review has found there is no objective evidence that the use of magnification improved clinical outcomes. What is more disappointing is that since this review’s initial publication back in 2006, no high quality trials have been conducted to assess the impact of magnification on endodontic outcomes. While three potentially relevant trials were assessed for this review, they were excluded for a range of reasons. Consequently, long-term well-designed RCTs should be performed. In order to understand if there is a significant advantage in using magnification devices or not in endodontics.