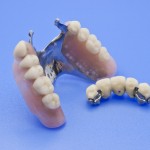 Double crown reconstructions provide the possibility of restoring a dentition using a few remaining teeth located in unfavorable positions for other prosthetic approaches Although they require high precision from both the dental technician and clinician. The aim of this review was to systematically screen the literature for data related to the survival and complication rates observed with dental or implant double crown abutments and removable prostheses under functional loading for at least 3 years.

Searches were conducted in MEDLINE (PubMed) and EMBASE databases as well as an extensive hand search without language restriction. Randomized controlled trials (RCTs) and prospective and retrospective cohort studies with a mean follow-up time of at least 3 years were included. Two reviewers selected articles independently with discrepancies resolved by discussion.

17 papers were included for data extraction. Due to the lack of information with regard to the exposure time pooling of the data and estimation of the cumulative survival and complication rates in years was not feasible. The observations were grouped according to the type of abutment supporting the prosthesis for teeth and implants and the retention design of the telescopic crowns.

The main findings of this review are: (I) double crown tooth abutments and dentures demonstrated a wide range of survival rates. (II) Implant-supported mandibular overdentures demonstrated a favorable long-term prognosis. (III) A greater need for prosthetic maintenance is required for both tooth-supported and implant- supported reconstructions. (IV) Future areas of research would involve designing appropriate longitudinal studies for comparisons of survival and complication rates of different reconstruction designs.

It is not immediately clear in this review what the study designs of the included studies and with the inclusion of retrospective study designs there are concerns regarding selection bias. In a review by Koller et al  (2011) noted by the authors, only 11 studies were included, although, the review search was restricted by language. Koller concluded that the available literature did not provide sufficient information regarding the long-term outcome of double crown-retained removable dental prostheses (RDPs).