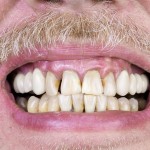 Periodontal disease is very common and various studies have suggested that between 5-20% of any population suffers with severe periodontitis (SP). The aim of this review was to consolidate all epidemiologic data about SP and, generate internally consistent prevalence and incidence estimates for all countries, 20 age groups, and both sexes for 1990 and 2010.

Searches were conducted in Medline, Embase, and LILACS and chief dental officers worldwide were written to asking for conference reports, theses, government reports, and unpublished survey data. Searches, study selection, and data abstraction were carried out independently by two reviewers. All descriptive epidemiology studies presenting SP were considered. Severe periodontitis was defined for this review as a CPITN score of 4, a clinical attachment loss (AL) more than 6 mm, or a gingival pocket depth (PD) more than 5 mm. Meta-regressions were conducted based on modeling resources of the Global Burden of Disease 2010 Study

In conclusion, policy makers need to be aware of a predictable increasing burden of severe periodontitis  due to the growing world population associated with an increasing life expectance and a massive decrease in the prevalence of tooth loss throughout the world from 1990 to 2010. These changes underscore the enormous public health challenge posed by SP and are a microcosm of the epidemiologic transition to non-communicable diseases occurring in many countries.

The methodology of this review enabled the researches to identify the best available data sources. Although as they themselves highlight there are potential problems with both the measurement and reporting of SP. There are also problems caused by the lack of agreement on how to measure periodontal health consistently. The vast majority of the studies are also cross-sectional with only 2 of the studies included measuring incidence.