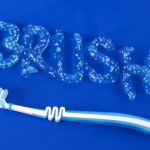 Regular and effective removal plaque is considered to be an efective method of controlling and preventing gingivitis. Toothbrushing with dentifrice is a key method and antiplaque agents (eg chlorhexidine, triclosan/copolymer) have been introduced with the aim of increasing effectiveness.   The aim of this review was to see if chlorhexidine (CHX) dentifrice /gel was more effective than regular dentifrice /gel in improving plaque and gingivitis scores.

The Cochrane CENTRAL, Medline and Embase databases were searched for randomized controlled clinical trials (RCTs) or controlled clinical trials (CCTs). Trials conducted in adults over the age of 16 that measured clinical outcomes; plaque, gingivitis, bleeding upon probing and tooth surface discoloration and were 4 or more weeks in duration were included.  Only English language studies were considered.  Data extraction and risk of bias was carried out by two reviewers with the body of evidence being graded using the GRADE approach

within the limitations of this analysis, it may be concluded that toothbrushing with a CHX gel does not provide conclusive evidence. Brushing with a CHX dentifrice can be effective with regard to the control of plaque and gingivitis. Tooth surface discoloration was observed as side effect, which potentially can have a negative impact on patients’ compliance.

Restricting the search to English language studies may mean that some relevant studies were excluded.  As discussed by the authors 3 of the studies are from the same research group and 5 of the 11 included studies received support from or had co-authors related to industry.   The authors graded the overall evidence in relation to CHX gel as weak to very weak, while they considered the evidence for CHX dentifrice to be moderate.  Concerns of the quality of the available evidence presented in this review, the fact that it was not possible to calculate an effect size together with the adverse effects of taste and staining and the fact that CHX dentifrice does not contain fluoride means that these agents are likely to be of limited use for regular care. There are some ongoing Cochrane review looking at chlorhexidine for caries prevention in children and adults and triclosan that should add some further infromation to this topic in due course.