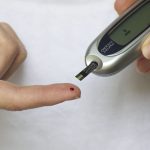 Periodontal disease is very common and over 400 hundred million people worldwide are estimated to be suffering with diabetes and this is expected to rise to over 600 million by 2040. The majority of cases are type 2 diabetes mellitus (T2DM). A number of studies have demonstrated a link between diabetes and periodontal disease.

The aim of this study therefore, was to deter- mine whether baseline periodontitis associated with the subsequent development of T2DM in a cohort of diabetes-free 58–72-year-old men in Northern Ireland.

Participants were from a longitudinal cohort study of cardiovascular disease in Northern Ireland. Between 1991-4  2748 men were recruited representing around 5% of the 50–60-year-old men in the greater Belfast region. From 2001 to 2003, 2010 surviving men attended for re-screening with their date of attendance taken as the baseline. This study is based on 1400 (69.7%) dentate men who had a comprehensive periodontal examination between 2001-3. Of the remainder, 158 (7.8%) men were edentulous, 363 (18.1%) did not have a dental examination due to the lack of a dental examiner and 89 (4.4%) refused or had a medical condition that precluded periodontal probing. Patients with pre-existing diabetes at baseline were excluded by self-report verified by medical practitioner. Incident T2DM case in the first year were excluded to minimised undiagnosed baseline diabetes.

The men were followed up bi-annually by questionnaire, Medical practitioners were contacted for validation if diabetes diagnosis was reported or medication prescribed. A “time to diagnosis” was generated based on the date the participant was initially examined and their date of diabetes diagnosis.Cox’s proportional hazard models were used to estimate the effect of periodontitis on incident diabetes. Multivariable analysis included adjustment for various known confounders.

baseline moderate to severe periodontitis was an independent risk predictor of incident T2DM in a group of 58–72-year-old men in Northern Ireland. This relationship was independent of known confounders for incident T2DM, and could reflect a shared biological pathway between periodontitis and diabetes. Alternatively, periodontal disease may be an aetiological factor for T2DM. Further studies should be aimed at specifically addressing the issue of causality, and the mechanistic process regarding the potential impact of periodontitis on the disease process of diabetes.

This interesting cohort study provides some indication of an association between moderate to severe periodontitis and developing T2DM. The authors highlight several issues with the study. The lack of baseline fasting glucose to exclude undiagnosed diabetes cases which they have attempted to minimise by excluding case diagnosed in the first 12 months. Periodontal states was only assessed clinically at baseline and while notified and advised to seek treatment it is unknown any interventions were performed.  Also while information on a number of potential confounders was collected the possibility of  residual confounders or not taking into account other potential confounders should be noted.

Last reply was September 20, 2017
Try out our members features!