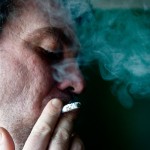 Periodontal examinations were carried out in patients from the Dunedin Multidisciplinary Health and Development Study (DMHDS). DMHDS is a longitudinal study of a complete birth cohort born in Dunedin, New Zealand between 1 April 1972 and 31 March 1973. The periodontal examinations were conducted at ages 26, 32 and 38, with only half-mouth examinations possible at age 26, but full-mouth examinations undertaken at 32 and 38. The plaque (debris) score for each participant was recorded on six teeth (four posterior and two anterior)using Greene and Vermillion’s Simplified Oral Hygiene Index (OHI-S). Flossing status was assessed by a self-report question at ages 26, 32 and 38.Tobacco smoking was determined at ages 15, 18, 21, 26, 32 and 38. With Cannabis smoking being determined at 18, 21, 26 and 32 and 38. Socio-Economic Status (SES) was determined. Generalized Linear Mixed Modelling with a quasi-binomial approach was used to examine associations between chronic smoking and periodontal attachment loss.

The smoking-periodontitis association is observable with hierarchical modelling, providing strong evidence that chronic smoking is a risk factor for periodontitis.