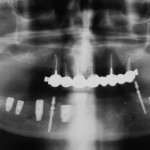 As the number of dental implants being placed increases it seems inevitable that the numbers affected by peri-implantitis will also increase.   Peri-implantitis is inflammation of the peri-implant tissues accompanied with changes in the level of crestal bone and with the presence of bleeding on probing and/or suppuration, with or without concomitant deepening of peri-implant pockets. Rates of peri-implantitis have been reported as being between 2 – 47% .  The aim of this review was to evaluate the effectiveness of reconstructive procedures for treating peri-implantitis.

Studies that compared at least 1 clinical and radiographic parameter between reconstructive therapies and other surgical modalities, such as resective or open flap debridement surgeries, for treating peri-implantitis, with a minimum sample size of 10 implants and at least 12 months of observation were sought.

Currently, there is a lack of evidence for supporting additional benefit of reconstructive procedures to the other treatment modalities for managing peri-implantitis.

The 2012 Cochrane Review by Espositio et al looked at all treatments for peri-implantitis. They considered any non-surgical or surgical procedure including the use of local or systemic therapeutic agents as well as any other interventions aimed at the recovery of peri-implant oral health.  Nine RCTs  were included in their review and they concluded:-

There is no reliable evidence suggesting which could be the most effective interventions for treating peri-implantitis. This is not to say that currently used interventions are not effective.

This current review focused on regenerative approaches, although, only 1 RCT actually compared these with non-regenerative approaches and there were only 16 patients in the intervention arm.  The majority of the studies contributing to the meta-analysis presented were from case series with relatively small sample sizes as the authors note in their discussion.  There is also much heterogeneity in the implant systems and approaches.

From the findings of the Cochrane review and this current review it is apparent that evidence is lacking for the best approaches to treat peri-implantitis With increase numbers of implants there is a need for high quality studies of appropriate size to begin to answer the question.