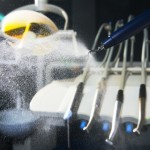 Both surgical and non-surgical approaches can be used for the treatment of chronic periodontitis. The traditional approach being improving plaque control and non- surgical scaling and root planing (SRP) followed by surgical re-treatment where indicated. The main aim of this study was to compare immediate surgery with SRP in the treatment of advanced periodontal disease focusing on the prevalence of residual sites and cost-effectiveness

Patients aged over 35 with at least 20 teeth and one site per quadrant with probing pocket depth (PPD) ≥6 mm, bleeding on probing (BoP) and bone loss surpassing one third of the root length as assessed on periapical radiographs were eligible. They were randomised to either non- surgical scaling and root planing (SRP) under local anaesthesia over two sessions or open flap debridement (access flap at all sites, osseous re- contouring, soft tissue reposition) over 4 sessions. In SRP group supragingival plaque and calculus were removed at 3 months. At 6 and 12 months patients received additional non-surgical re-debridement and systemic azithromycin. Patients from both groups showing residual pockets ≥6 mm deep at the 6-month re-assessment, were additionally treated by means of systemic azithromycin. The chair-time and associated cost for all other visits were estimated based on the standard time schedule imposed by the administration of the Hospital.

Both treatment arms were equally effective in terms of clinical outcome demonstrating less than 1% residual pockets at 12 months. Although 700 Euro could be saved on average by performing SRP instead of surgery, the latter significantly reduced the need for supportive care and systemic antibiotics.

While this study of treatment costs is based on a randomised controlled trial it is relatively small and no differences in clinical outcomes between the two groups at 12 months. Only the clinical costs were estimated additional travel and opportunity costs for the patients are therefore not included.  As the main difference in the cost is due to additional surgery visits in the surgery group this is likely to further increase the costs to patients.  No detailed breakdown of the clinical costs are provided.