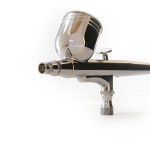 Earlier this month (Dental Elf – 5th-Feb 2015) we looked at a review of patients’ perceptions of air polishing devices for periodontal treatment.

The aim of this review was to assess the effects of air polishing devices on oral tissues.

Searches were conducted in Medline, Embase and the Cochrane Library for controlled studies assessing the effect of air polishing devices on dentine, cementum or marginal gingivae. Only studies in English or German were considered. Two reviewers independently screens studies with risk of bias being assessed using the Cochrane Collaboration tool and the Strengthening the Reporting of Observational studies in Epidemiology (STROBE) statement. Because of the heterogeneity of the study designs and spraying protocols meta-analysis was not conducted

The authors have noted a number of limitations in this review. It is restricted to studies published in English or German so additional relevant studies may have been missed. The majority of the included studies have been conducted in vitro which may not adequately represent clinical use, as clinically relevant protocols may not have been followed. A wide range of air polishing devices and powders were tested and in some studies details on grain sizes of powders were not provided. Product manufacturers supported a majority of the studies.

Overall the authors considered that there was moderate evidence that glycine powder air polishing had less potential for harm of oral hard and soft tissues than sodium bicarbonate powders.