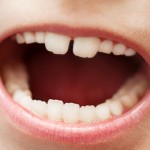 In recent years otolaryngologists have noted increasing referrals for upper lip frenectomy to potentially improve an infant’s ability to breastfeed. Some referrals are linked with aesthetic concerns associated with maxillary midline diastema.

The aim of this review was to provide information about the association between a superior labial frenum and maxillary midline diastema.

…two subtypes of frenum: papillary and papillary penetrating frenum, are associated with maxillary midline diastema. Superior labial frenectomy should be delayed until permanent lateral incisors have erupted, as this can spontaneously close the physiological MMD. Current literature recommends against frenectomy before addressing the diastema with orthodontics, which helps to prevent diastema relapse. It is also imperative to rule out other odontogenic and oral cavity causes of diastema, such as thumb sucking, dental agenesis, and other causes. Online information may not always be fully representative and should be interpreted in the full context of the patient’s medical history before referral for surgical intervention.

A medical librarian undertook a search of a good range of databases for this review however restriction to the English language could have excluded some relevant paper. As a number of different classification systems for frenal attachment were used and age ranges of the included patients varied no quantitative analyses was presented. A good narrative summary of the included studies together with details tables was provided. However, as all the included studies are cross-sectional, they do not address the question of closure of diastema after frenectomy.  They do quote one small study (Suter et all.,2014) which suggest that in patients with prominent frenum closure is more predictable with frenectomy and concomitant orthodontic treatment than with frenectomy alone. Furthermore, division of the frenum prior to orthodontic treatment may result in scarring and lead to diastema relapse. Future studies would benefit from agreement and common use of a single frenum classification system and well conducted prospective studies.