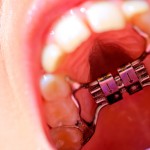 The prevalence of posterior crossbite, where the top teeth or jaw are narrower than the bottom is between 1-16% in the primary dentition. The majority persist into the permanent dentition (50-90%)

The aim of this review was to assess the effects of orthodontic treatment for posterior crossbites.

Searches were conducted with no language or date restriction in the Cochrane Oral Health Group’s Trials Register, the Cochrane Central Register of Controlled Trials (CENTRAL), Medline, Embase, the US National Institutes of Health Trials Register and the World Health Organization (WHO) Clinical Trials Registry Platform.

Randomised controlled trials (RCTs) of parallel design that assessed orthodontic treatments to correct a posterior cross-bite or expand the top back teeth, or both were included. Studies of any non-surgical treatment were considered. Studies involving those with a Class III skeletal relationship, cleft lip or palate (or both) or other syndrome associated with craniofacial anomalies were excluded.

Study selection, data abstraction and risk of bias assessment was carried out independently by two reviewers. The primary outcome was correction of the crossbite.

There is a very small body of low- to moderate-quality evidence to suggest that the quad-helix appliance may be more successful than removable expansion plates at correcting posterior crossbites and expanding the inter-molar width for children in the early mixed dentition (aged 8 to 10 years). The remaining evidence we found was of very low quality and was insufficient to allow the conclusion that any one intervention is better than another for any of the outcomes in this review.

As the authors note there is a limited amount of evidence available to answer this question and it was only of low to moderate quality. The available studies had small sample sizes and there was significant heterogeneity. Since the first version of this review in 2001 another review of this topic has been conducted by Zuccati et al ( Dental Elf 23rd Dec-2011 ). That review only looked at evidence published between 1999-2011.

Both the Zuccati review and this current review call for high quality studies following CONSORT standards to be conducted.   The authors of this review also call for orthodontists to work with COMET (Core Outcome Measures in Effectiveness Trials) Initiative (www.comet-initiative.org). to develop core outcome sets.