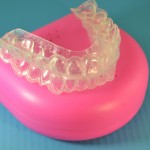 After orthodontic treatment a period of retention is considered necessary to ensure long-term stability and prevent relapse.

The aim of this study was compare the effects of three different retention strategies on counteracting orthodontic treatment relapse at least 5 years post retention.

After undergoing orthodontic treatment by a single experienced orthodontist patients were randomised to one of three retention methods: –

All retention appliances were provided within 1 hour of debonding.

Patients in groups V-CTC and V-S were instructed to wear the VFR for 22–24 hours per day for 2 days and nights and then at night for 12 months. In group P, the positioner was to be worn for 30 minutes during the daytime and during sleep for 12 months. During daytime wear the patients were instructed to actively chew into their positioners. The second year of retention patients wore their retainers every other night.

Dental Casts were taken before orthodontic treatment (T0); at appliance removal (T1); at two years (T2) and 5 or more years out of retention (T3). Maxillary and mandibular Little’s irregularity index (LII), intercanine and intermolar width, arch length, and overbite/overjet were recorded in a blinded manner

After 5 years or more out of retention, the three retention methods had achieved equally favourable clinical results. Thus a maxillary VFR combined with a bonded canine-to-canine retainer in the mandible; a maxillary VFR combined with stripping of the mandibular anterior teeth and a prefabricated positioner can all be recommended. Hence, the clinician is not limited to routine use of a bonded mandibular canine-to-canine retainer: choice of retention method can be individualized, taking into account such variables as orthodontic diagnosis, the expected level of patient compliance and the patient’s wishes and financial considerations.

This paper reports the outcomes 5 years or more out of orthodontic retention fro a group of patients. Previously this group had reported the outcomes of this study after completion of two years retention (Dental Elf – 22nd Jan 2013). At that time they reported no differences between the 3 groups and that continues to be the case. However as with most long-term studies there is the problem of loss to follow up which in this case is 35% although similar in each arm of the study. The 2006 Cochrane review by Littlewood et al identified a lack of randomised trials to assess the effectiveness of retention methods in orthodontics since then a small number have been published but more high quality studies are needed.