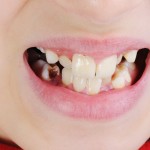 Permanent canine usually erupt around 10.5 years in girls and 11.5 in boys.  Between 1-3% do not erupt normally the majority (85%) are displaced palatally.  They can lead to unwanted movement of neighbouring teeth, dental crowding, root resorption of the ectopic tooth, as well as the neighbouring teeth, cyst formation, infection, referred pain and combinations of the above.

This aim of  review was to assess whether interceptive treatment in the mixed dentition prevents impaction of palatally displaced canines (PDC).  They searched Medline, the Cochrane Library and Scopus  for randomized controlled trials, prospective and retrospective studies with untreated controls, and clinical trials comparing at least two treatment strategies.  Data was selected and extracted independently by three reviewers and study quality evaluated.

They found two studies that met the inclusion criteria.  However, because of the unequivocal results and heterogeneity in the study methods, the scientific evidence was too weak to fully evaluate the effect that interceptive treatment might have on PDC and which treatment modalities are most effective.

To obtain reliable scientific evidence as to whether interceptive treatment prevents impaction of PDC and which treatment modalities are the most effective, better controlled and well-designed RCTs are needed. Future studies should also include assessment of patient satisfaction and pain experience as well as analysis of the costs and side-effects of treatments.

A Cochrane review looked at the evidence for extraction of deciduous maxillary canines to facilitate the eruption of the palatally ectopic maxillary permanent canine.  They concluded:-

There is currently no evidence to support the extraction of the deciduous maxillary canine to facilitate the eruption of the palatally ectopic maxillary permanent canine. Two randomised controlled trials were identified but unfortunately, due to deficiencies in reporting, they cannot be included in the review at the present time.

Last reply was December 14, 2012
Try out our members features!