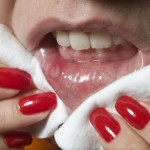 Recurrent aphthous stomatitis (RAS) is the most common form of oral ulceration. Prevalence rates for the general population vary between 5-60%. Onset generally peaks between the ages of 10-19 an often persists in to adulthood. A wide range of topical and systematic treatments have been utilised including low-level laser therapy. The aim of the study was to determine whether low-level laser therapy (LLLT) has an analgesic effect in patients with recurrent aphthous stomatitis (RAS)

Patients over 10 years of age presenting with pain from RAS with a duration of 3 days or less were invited to participate. Those with systemic disease or undergoing systemic treatment for RAS were excluded. Patients were randomised to either GaAlAs (gallium- aluminum-arsenic) laser treatment wavelength, 809 nm; power, 60 mW; pulse frequency, 1800 Hz; duration, 80 seconds per treatment; and dose, 6.3 J/cm2, or the placebo group, who underwent the same procedure  but without any power. The procedure was repeated on days 1 and 2. Prior to treatment patients recorded pain on a visual analog scale (VAS) and subjective experience of eating, drinking, and brushing their teeth. Patients subjective experience questions were repeated on day 3.

that LLLT has a pain-relieving effect on minor RAS compared with placebo. LLLT also reduces the pain caused by eating, drinking, and brushing teeth.

This is a small short-term study where the same individual conducted both the treatment and outcome assessment. Although the outcomes assessed using patient reported information the fact that the same individual administered them might have influenced the responses. The authors highlight 2 previous studies that used  lasers for RAS and currently a Cochrane review is underway looking at topical treatments for RAS (Dental Elf 9th Jan 2014) that will be considering laser treatments. The Cochrane topical treatments review will complement the published Cochrane review of systemic treatments for RAS (Dental Elf 14th Sept 2012).