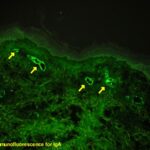 The mucous membrane condition known as chronic ulcerative stomatitis (CUS) is rare and shares traits with other autoimmune illnesses: it shows up as oral ulcerated or erosive lesions. It was initially characterised as a syndrome of persistent oral ulcerations, linked to a stratified epithelium-specific antinuclear antibody (SES-ANA), a well-known immunological specific marker.

The purpose of this study was to conduct a systematic review of the literature to locate all cases of CUS that had been published in order to describe the clinical, demographic, microscopic, immunological, and therapeutic responses of CUS to various medications.

A systematic review of the literature was carried out, and computer-based searches were made in the following databases: Google Scholar, PubMed, Scopus, EMBASE, LILACS, and Opengrey.Clinical case reports, case series, and case reports combined with reviews and observational studies were taken into consideration as inclusion criteria. Regarding the participant criteria, any patient with a CUS diagnosis who had oral lesions, independent of gender or age was included. The exclusion criteria were literature reviews, studies without case reports, animal model studies, and in vitro research.Two reviewers independently evaluated the selected studies’ methodology and extracted the necessary data and a third reviewer evaluated disputes.

Within the results, the gingiva was the most frequently affected site, accounting for (38%) of the cases, followed by the buccal mucosa and the tongue. The majority of the lesions were erosive, with isolated lesions being observed in 21 patients and a diffuse distribution in 14 patients. In many cases, white lesions in the form of plaques or stretch marks were found. Only 16 and 3 cases of ulcerated and bullous lesions, respectively, were reported. Desquamative gingivitis-like gingival lesions (in 12% of cases) mimicked erosive oral lichen planus (OLP) or pemphigoid illness. Almost all patients who were given a diagnosis complained of pain, sensitivity, and trouble eating. Only 15% of the patients had concurrent skin lesions.

An atrophic/parakeratinised stratified epithelium, a “band-like” lymphocytic inflammatory infiltrate immediately beneath the epithelium, “sawtooth-like” epithelial ridges, vacuolar degeneration of basal layer cells with replacement by an eosinophilic clot, and civatte bodies were all described as parts of an OLP-like pattern in more than half the cases. The majority of the time (60%) a mixed inflammatory infiltration with T lymphocytes and plasma cells was seen.

The direct immunofluorescence (DIF) remains the gold-standard diagnostic resource and was performed in 69 cases, revealing a dotted pattern of deposition of stratified epithelium-specific antibodies (SES-ANA). The serum of 38 patients was collected for the performance of the indirect immunofluorescence (IIF), and the use of epithelial substrates such as monkey and guinea pig oesophagus often resulted in positive SES-ANA IgG. Most patients were treated with antimalarials, and the treatment of choice that proved to be effective is hydroxychloroquine (HCQ). This entity must be considered in the differential diagnosis of other autoimmune diseases, as it may be underreported.”

This was a thorough and detailed systematic review which helped establish that CUS is likely underdiagnosed because it is a rare, poorly understood condition that presents clinically as non-specific ulcerated or erosive lesions. Currently, the diagnosis of CUS is made using a combination of clinical, histopathological, and through a process of elimination, when corticosteroid treatment failure is noted. Additionally, it appears that CUS primarily affects middle-aged women and that it can result in oral and skin lesions, with similar clinical and microscopic findings to erosive OLP. The review supports the fact that DIF is still the gold-standard diagnostic tool and ought to be used whenever practical, although expensive. It has also been demonstrated through this paper that HCQ is the best form of treatment for CUS because it is not responsive to corticosteroids.

By Emmanuelm at en.wikipedia, CC BY 3.0, Link