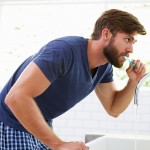 Searches were conducted in Medline, Embase, Web of Knowledge/ Science (including current contents connect) and the Cochrane Oral Health Group Trials Register. In addition hand searching of the Journal of Clinical Periodontology, the Journal of Periodontology, the Journal of Periodontal Research and IADR abstracts was carried out. Studies involving clinical examinations to assess extent of gingival recession and or NCCLs and factors that may ne associated with their development were considered.  Two reviewers independently abstracted data and methodological quality assessment was undertaken.

The data to support or refute the association between toothbrushing and gingival recession and NCCLs are of variable quality.

This review has adopted a good methodological approach and this research group had previously reviewed the evidence for toothbrushing as a causative factor in the development and progression of non-inflammatory gingival recession (Rajapakse et al. 2007). At that time they concluded that there were insufficient, good quality data to support or refute the association. This new review included the potential role of toothbrushing in NCCLs and while they were able to include some new RCTs the overall quality of the available studies is variable. The one meta-analysis they were able to conduct only included 2 studies and did show a small benefit in favour of powered toothbrushes, but, as the authors note themselves a mean difference of 0.2mm is unlikely to be of clinical significance and could change markedly if larger high quality trials were conducted to assess this issue.