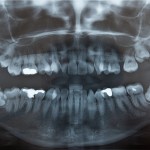 The sagittal split osteotomy (SSO) is a common procedure  for the correction of mandibular deformities.  It  was first introduced Schuchardt in 1942  the current technique which has been refined an popularised in subsequent years.   Overall it is a safe procedure the  an important intra-operative complication being  an unfavourable fracture with incidences  varying between  0.7-20% being reported.  The aim of this study was to investigate prospectively the effects of the presence or absence of third molars during sagittal split osteotomies (SSOs) on the frequency of unfavourable fractures, degree of entrapment and manipulation of the inferior alveolar nerve (IAN), and procedural time.

A prospective cohort of patients requiring an SSO as part of the correction of their dentofacial deformity were recruited for the study.  Patients who had mandibular third molars removed less than 6 months before the planned SSO or who had had a previous SSO or prior mandibular fracture  were excluded. The primary predictor variable was the status of the mandibular third molar at the time of SSO, and it was divided into 2 levels, present at the time of SSO (group I) or absent at the time of SSO (group II). The primary outcome variable was unfavourable splits. The secondary outcome variables were the degree of entrapment/manipulation of the IAN and the procedural time.

The presence of third molars during SSOs is not associated with an increased frequency of unfavourable fractures. Concomitant third molar removal in SSOs also decreases proximal segment IAN entrapment but only slightly increases operating time.

Last reply was December 17, 2014
Try out our members features!