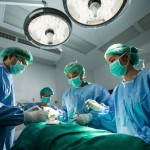 There is a longstanding concern about airway compromise following orthognathic surgery because of facial and upper airway swelling.  High-dose short-term corticosteroids have been used for many years with the aim of decreasing the duration of endotracheal intubation, pain and shortening hospital stay. While the use of corticosteroids have become common practice in orthognathic surgery no clear evidence-based protocols are available.

The aim of this review was to assess the effects of perioperative systemic corticosteroids on clinically important outcomes in patients undergoing orthognathic surgery.

Searches were conducted in the Medline, Embase, Cochrane Central, CINAHL, Lilacs, Scopus, and Web of Science databases with no limits or language. Randomised controlled trials (RCTs) examining any corticosteroid administered systemically by any route, dose or duration were considered.  The primary outcomes were postoperative reintubation length of stay, facial oedema and any adverse effects.

Data was abstracted independently by two reviewers with risk of bias being assessed using the Cochrane tool.

The authors observed no evidence of effect of systemic corticosteroids on the risk of reintubation and hospital length of stay in orthognathic surgery. Although facial oedema decrease was observed to be improved with the intervention, adverse effects were inconsistently screened and reported. Thus, the use of systemic steroids in orthognathic surgery is not supported by strong evidence.

This is a well-conducted review based on an extensive database search. Unfortunately, only a small number of small studies relevant to the question could be identified.  None of the studies reported on the reviewers chosen primary outcome or postoperative intubation which was highlighted as an important clinical outcome. In addition, none of the studies were considered to be at low risk of bias.

Meta-analysis of 3 of the included studies did find a reduction in facial swelling with corticosteroid use but there has been no systematic assessment of adverse events. There is also a lack of patient reported outcomes. Well conducted and reported high quality trials are needed to clarify the evidence for the use of corticosteroids.