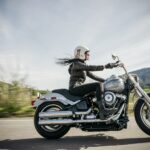 The benefits of helmet wearing to prevent head injury and reduce the severity of injury and mortality in motorcyclists has been consistently demonstrated and is mandatory in many places. Both full face and open-faced helmets are available and facial trauma may be more frequent in open-faced designs.

The aim of this review was to determine whether helmet use and the type of helmet reduce the occurrence and severity of facial fractures in hospitalised victims of motorcycle accidents.

the use of a helmet leads to a lower number of fractures and severity of trauma when compared to non-use. Regarding the type of helmet, there was no difference in the occurrence and severity of facial fracture in individuals who used closed or opened helmets.

The 2008 Cochrane review by Liu et al showed that ‘helmets are effective in reducing head injuries in motorcyclists who crash by 69% and death by 42%’. They also stated that there was no conclusive evidence on the effects of helmets on facial injuries. Most of the studies included in this new review were published after 2008 and an assessment of the impact of helmet wearing on facial fractures was possible.  The findings indicating that there were significant fewer upper and mid face fractures in helmet wearers although not for the lower face. However, while the authors reported no differences between full face and open-faced only 8 of the 26 included studies reported on this.  In relation to the severity of trauma again only 8 studies reported on this.  In the discussion the authors mention a number of potential confounders including fixation status of helmet, power and speed of the motorcycle at the time of accident as well as alcohol or psychoactive substance use.

Photo by Harley-Davidson on Unsplash