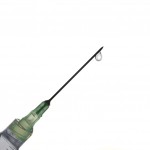 Elimination of bacteria from the root canal is a key aim of root canal treatment (RoCT). The aim of this study was to compare the results of a non-activated single-irrigation protocol (NAI) that used only 1% Sodium hypochlorite (NaOCl) with a passive ultrasonic multi-irrigation protocol (PUI) that used 1% NaOCl, 17% ethylenediaminetetraacetic acid (EDTA), and 2% chlorhexidine (CHX).

Patients requiring primary RoCT of a posterior tooth with apical periodontitis, which was verified with a radiograph and negative cold test, were eligible for inclusion.  Standard nonsurgical endodontic therapy was performed on both groups in a 2-visit approach by using calcium hydroxide intracanal medicament with patients randomised to either the PUI or NAI protocols. The primary outcome was bacterial cultures taken at 4 time periods, before instrumentation, after irrigation protocol, after CaOH2 medication, and before obturation.

This trail compares an irrigation protocol involving 3 key agents (NaOCL, EDTA and CHX) ) with a single agent NaOCL  and finds no statistical difference in negative bacterial cultures.  The study provides a great deal of detail regarding the clinical procedures employed, although no power calculation was presented to assess whether the sample size was large enough to detect a difference.

In a recent blog  (Dental Elf 13th Sept 2012) we highlighted the Cochrane review by Fedorowicz et al that compared different endodontic irrigation protocols. In a article by Basrani from the JCDA Express looks at 3 articles that examines three reviews of passive ultrasonic irrigation in endodontics.

Basrani B – Is ultrasonic irrigation needed in Endodontics?