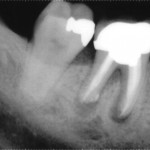 In root canal treatment (RoCT) apical preparation is traditionally to three sizes larger than the first apical binding file (FABF) although some have argued for further enlargement.  The aim of this study was to evaluate the effect of different apical preparation sizes on the outcome of primary RoCT in mandibular first molars.

Patients > 18 years of age with mature permanent mandibular first molars requiring RoCT were included. RoCT was performed according to a standard protocol with patients randomised to have master apical file size for each canal was set at 2, 3, 4, 5, and 6 sizes larger than the first file to bind at the working length. Clinical and radiographic follow-up examinations were performed every 3 months for 12 months.

The primary treatment outcome was change in periapical radiolucency at the 12-month follow-up, assessed by three examiners using the periapical index (PAI) score. As the study involved multi-rooted teeth, the least favorable of the scores given to individual roots was recorded. Secondary outcomes included the absence of pain and tenderness to percussion/palpation, the absence of sinus or any associated soft-tissue swelling, tooth mobility of grade 1 or less, and no deterioration in periodontal probing depth as compared with baseline measurements.

that apical enlargement to 3 sizes larger than the FABF is adequate, and any further enlargement may not provide any additional benefit for the long-term prognosis of endodontic treatment.

This authors did undertake a power calculation based on a  0.5 unit change in the PAI index  which  give a minimum sample size of 21 per group. Some may feel is not a big enough difference to be clinically important. The size of the sample is something that the authors discuss along with the drop-out rate and the one year review period.