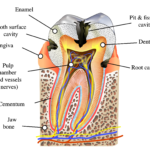 The aim of this Cochrane review was to compare interventions to treat carious lesions conventionally considered to require restorations in primary or permanent teeth with vital pulps.

HT, CR, SE, NRCC for cavitated, but not deep lesions in primary teeth

Compared with conventional treatment, there were lower numbers of failures with HT and SE in the primary dentition, and with SE and SW in the permanent dentition. Most studies showed high risk of bias and limited precision of estimates due to small sample size and typically limited numbers of failures, resulting in assessments of low or very low certainty of evidence for most comparisons.

This new Cochrane review provides a broader review of treatments for cavitated or dentine carious lesions superseding an earlier more focused review by Rickett’s et al published in 2013 (Dental Elf – 11th Apr 2013. The treatments included conventional restoration (CR) selective carious tissue removal /excavation (SE), stepwise carious tissue removal (SW), sealing carious lesions using sealant materials, sealing using preformed metal crowns (Hall Technique, HT) and non-restorative cavity control (NRCC).   All the studies included in the review were considered to be at high risk of bias was mainly due to allocation concealment and lack of blinding, with the blinding of operators and sometimes patients difficult for many of the comparisons.  The reviewers also highlighted their use of a composite measure for failure, a departure from their protocol which had planned to consider major and minor failure which may have difference impacts for patients. Most of the included studies has short follow up periods with only 4 studies presenting data for 3 years or more. While the review suggests some promise for more conservative approaches to the management of cavitated or dentine carious lesions the quality of the available evidence is only low to very low and only a small number of studies were conducted in the primary care setting. Aa the majority of caries lesion management takes place in primary care more studies should be conducted there preferably using a common outcome set and consider patient relevant outcomes as well as effectiveness and cost-effectiveness.

KDS4444 – This file was derived from: Blausen 0864 ToothDecay.png Own work