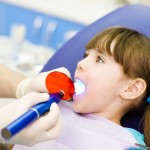 The latest update of the Cochrane review on fissures sealants (Ahovuo-Saloranta et al 2013) confirmed the use of resin-based sealants as a effective method of preventing or controlling occlusal caries.  The Cochrane review included 15 trials comparing glass ionomer with resin sealants and there was insufficient evidence to make any conclusions about the superiority of either of the two materials.  Glass ionomer cements  (GIC) release fluoride which may contribute to caries prevention so the aim of this study was to ascertain whether use of high-viscosity GIC as a pit and fissure sealant would result in a higher concentration of fluoride in interproximal fluids compared with a Resin-based (RB) sealant containing fluoride and a RB sealant without fluoride content.

6-7 year old children were randomised to one of three sealant groups, high- viscosity GIC (GIC, n = 926) Resin-based sealant containing fluoride (FRB, n = 923) or Resin- based sealants without fluoride content (RB, n = 927).  Children were provided with 1450ppm fluoride toothpaste during the study and instructed to brush teeth 3 times a day for 2 to 3 min after each of the 3 main meals. Sealants were placed by dental hygienists. Samples of interproximal fluid (within 2 hrs after oral hygiene procedures) were collected at baseline, before , the sealant procedure and 2, 7, and 21 days after the sealant procedure. Fluoride concentration was evaluated by means of a fluoride ion-selective electrode.

High-viscosity glass-ionomer cements, as pit and fissure sealants, increase the interproximal fluoride concentration more than do Resin-based fluoride-containing sealants, representing an effective intervention for increasing fluoride in the oral environment.

The protocol for this study is available on the clinical trials.gov website (see links) where the primary outcome is given as the fluoride concentration and the secondary outcome is given as dental caries. Presumably this outcome will be presented in due course.  For although the findings presented to date are interesting,  the outcome that is of most interest to practicing clinicians is the potential of GIC sealants to reduce caries; Because  they are considered to be less technique sensitive than resin-based sealants and the newer high viscosity GIC are considered to have improved characteristic over  the earlier products.