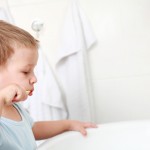 The effectiveness of fluoride varnishes for caries prevention for children and adolescents is well established with the recent update of the Cochrane review (Marinho et al 2013) estimating the pooled preventive fraction of 43% (95% CI 30-75%) for permanent teeth  and 37% (95% CI 24-51%) for primary teeth.  However although 22 trails were included there were only 10 related to primary teeth.

The aim of this study was to assess whether the application of fluoride varnish (FV) in preschool children at 6-month intervals decreases the incidence of caries lesions in the primary dentition and whether it is safe and well accepted.

Children age 1–4 years were recruited at a paediatric ambulatory clinic located in a public health centre in Rio de Janeiro. They were randomised to receive either a 5% sodium fluoride varnish or placebo varnish.  Applications were undertaken by dental students following toothbrushing (without paste), isolation and drying of teeth. They were advised not to brush on day of treatment.   Caries was recorded at d2 and d3 levels. The primary outcome was caries incidence as measured by the proportion of children developing any new dentine caries during the study.  Paediatric dentists masked to group assignment conducted examinations at baseline and at 6-month intervals.

Although safe and well accepted, twice-yearly professional FV application, during 2 years, did not result in a significant decrease in caries incidence.

Based on their findings, the authors highlight the fact that their study may well have been underpowered to detect a difference suggesting that there should have been at least 332 children per group.  The updated Cochrane review was not available when this article was submitted. That review contains 8 trials of children in the 1-5 age range and included a regression analysis that suggested that there was no effect of baseline caries severity and background exposure to fluoridated water on the preventive fraction with FV use.