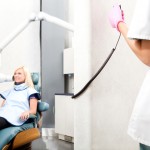 In recent years there has been a shift in intraoral dental imaging from conventional to digital film. While conventional film is still considered to provide superior spatial resolution the shorter working time, reduced processing errors and improved image storage of digital technologies have seen their use expand.

Currently two main options are direct digital sensors (DDSs) and indirect photostimulable phosphor plates (PSPs). The aim of this review was to identify the diagnostic capability of PSPs and DDSs in the detection of interproximal caries.

Searches were conducted in the Medline/PubMed, Embase, LILACS, Cochrane Library, the Web of Science and Google scholar databases. Studies that evaluated the diagnostic capability of PSPs and DDSs in detecting interproximal caries in human teeth, in both dentine and enamel that used histology as a reference standard were considered.

While DDS and PSP systems were excellent at identifying surfaces without caries (specificity), both lacked sufficient sensitivity to reliably identify surfaces with caries. No significant difference was noted between the performances of DDS and PSP digital systems. However, their low sensitivity dictates that the clinician must remain vigilant in corroborating all radiographic findings with a careful clinical evaluation for early interproximal lesions.

The authors have followed a sound methodological approach for this review with a wide ranging database search and the use of QUADAS-2 to assess the included study quality. They have also chosen the robust reference (gold) standard of histology. The use of this reference standard means that only a small number of studies could be included as they acknowledge. It also means that all of the studies we conducted on teeth ex-vivo.

The reviewers note that in the included studies conventional film demonstrated similar sensitivities and specificities to DSD and PSP. A recent review and meta-analysis of conventional film by Schwendicke et al (Dental Elf – 10th Jun 2015) which used a less robust reference standard found average sensitivities of 35% and 41% and specificities of 78% and 70% for clinical and in vitro studies retrospectively. While histology is a very good reference standard the authors also noted that there was no standardisation of the techniques used across the included studies.