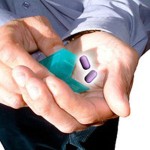 Clozapine is an atypical antipsychotic medication used to treat the symptoms of schizophrenia, most usually used as a treatment of last resort where people have not responded to other anti-psychotic treatments.

It has a number of severe side effects including and can also cause the excessive production of saliva and weight gain..

The researchers in this study were interested in whether Clozapine reduces rates of self injury and consequently the use of restraint. They were looking at this in the context of a medium secure setting and looking in particular at female patients with a diagnosis of borderline personality disorder and mild learning disability. They had found no previous studies of the use of this medication for this purpose with this group.

They collected data retrospectively for women who had been taking clozapine for a six month period, collecting information on rates of self injury and the use of restraint.

They found from statistical analysis that the difference between the means of both self injury and use of restraint was not statistically significant.

The authors conclude that their findings suggest a clinically significant reduction in rates of self injury and use of restraint in women with a diagnosis of borderline personality disorder and mild learning disability as a result of treatment with Clozapine.